Walking across Trafalgar Square, I came upon Kate Wakeling’s poem accompanying the City of Oslo’s annual Christmas tree gift to the people of London: 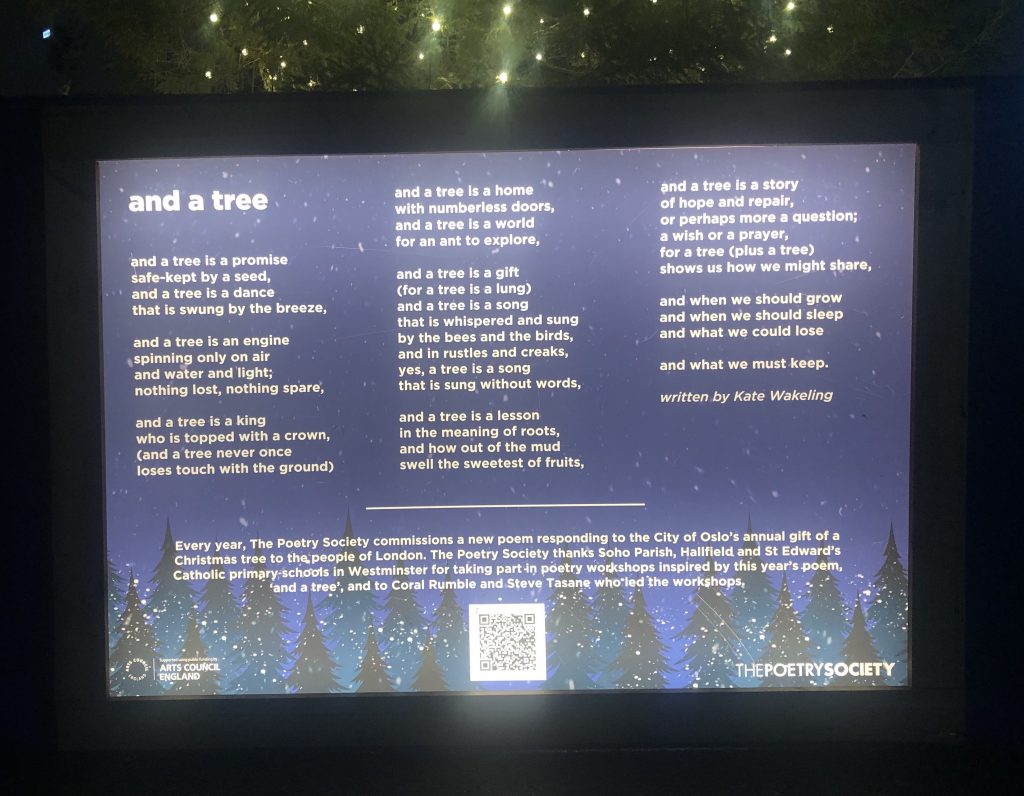 Thank you Kate, and happy new year to one and all.

In episode 1 of the BBC’s Great Poets In Their Own Words, UCL Professor of English John Mullan notes that “It was often said that WH Auden had this peculiar gift of making ordinary words sound terribly poetic by putting them into echoing patterns of sounds.”

This strikes me as a neat reminder of how putting ordinary words together in ways that sound right and ring true is at the heart of all forms of good writing. The meaning of our words is, of course, critical, but so too is the music. Indeed, the music reinforces the meaning. On this front, it’s not just the sound of each individual word that counts, but the patterns they create when we combine them – not just the single note but the rhythm and melody of the piece as a whole.

So whether it’s a famous poem or everyday business communication, it’s always good to write not just with your head and your heart but also with your ears – to create patterns that echo positively.

“I am the world’s first ultra-realistic artist-robot”, says Ai-Da, when asked to describe herself. “I draw, using cameras in my eyes and my robotic arm,” she says. Ai-Da also writes poetry. Indeed, she recently performed a poem to mark the 700th anniversary of the great Italian poet Dante’s death. She was given Dante’s epic narrative poem the Divine Comedy as a source, and using her algorithms and databank of words and speech patterns, created her own work.

So have we reached the point where robots are about to take over the world of writing? The answer is neither a categoric no, nor a simple yes, but somewhere far more indistinct and interesting in-between.

To write her poem, Ai-Da had human help. And I’m not talking about the humans who wrote her algorithms. According to Aidan Meller, Creative Director of the Ai-Da Robot Project, “restricted editing” also plays a part in the creation of her final poetry. “She can give us 20,000 words in 10 seconds,” he says. “And if we need to get her to say something short and snappy, we would pick it out from what she’s done.” So it’s a collaborative effort between human and machine, which to me points the way to the best form of future. One where artificial intelligence (AI) and human intelligence (“Hi”) happily co-create for a common good.

I’m not saying that’s easy – far from it. As Ai-Da puts it in her poem honouring Dante, “There are some things, that are so difficult – so incalculable…” But difficult isn’t impossible, especially when it is so desirable. Living not just well but better with AI – this is the big challenge and opportunity of our age. An epic challenge and opportunity worthy of great poetry.

So as we head towards the new year, let’s welcome Ai-Da, her editors and the many more robot-artists no doubt yet to come – and encourage them all to write their best for everyone.

We supply love and good energy

We sing to each other across buildings…”

So begins Love in the Time of Coronavirus, a film made by artist Chris Ridell and poet Nikita Gill to mark National Poetry Day (yes, it’s today).

For me, every day is a good day to celebrate poetry. But if we had to pick just one it would be today, so let’s sing poetry’s praises to each other across buildings, over Zoom calls – whenever, wherever and however we can.

As close to music as I can get is how I like to write.

As Oliver Reichenstein points out, “Being fully immersed in writing is like composing and playing music while we drum up our perceptions into letters, words, sentences, and paragraphs.” In his post on Music in Writing, he shares Martin Amis’s take: “What you’re trying to do is: Be faithful to your perceptions, and transmit them as faithfully as you can… You know I just say these sentences again and again in my head, until they sound right. And there is no objective reason why they sound right. They just sound right to me. So it’s euphony, sometimes it’s harshness you want. But it’s… it’s just matching up the perception with the words… in a kind of semi-musical way.”

Beyond the sheer pleasure of listening to the melody, beat and tone of your words as you write, why write this way? Grace Nichols nails it: “The rhythm and musicality of poetry is more direct in its appeal to the human heart and spirit.” In short, musical writing is more effective.

So, write with your ears, and let your sentences sing.

For me it started with sunshine fingers…

A beautiful poem by Gilda Hanson, a very promising young poet deservedly commended in the Agincourt 600 competition. I’m very proud to say she is also my daughter.

We were silent
Full of fatigue and fear

I heard my heart
Cast out of steel
Thumping

And I SOARED!
As high as the heavens

Beside me
My brothers and sisters
Bodkins, swallowheads
An army of arrows in flight

Below me
Swords danced
A chaos of screams
Shouts, yells
Of mud, blood and guts

And down my fellow arrows arched
A waterfall of death

Off to the annual poetry fest at my daughter’s school, where Paul the poet urges us all to strive to “say the biggest things with the littlest words”.

This doesn’t simply mean keeping your communication short, but rather as long as it needs to be – and no longer. The poetic art of compression can lead to some pretty lengthy pieces, such as Claudia Rankine’s 160-page Citizen, which has just been shortlisted for the Forward prize.

From the three lines of a haiku to the 100 cantos of Dante’s Divine Comedy, great poetry squeezes as much as possible into the space it occupies. That’s one of the ways it packs such a punch.