The one who tells the story…

There’s a Native American proverb that says “The one who tells the story rules the world”, says psychologist Dr Zoe Walkington in a brilliant BBC feature on the power of stories not only to influence or persuade us, but literally to change our minds.

People who read a couple of chapters of a story about vampires genuinely believe that their teeth are slightly longer than other people in the population. But it doesn’t stop there – if, for example, you read the word “jump”, you fire up the areas of your brain that are activated when you actually do jump.

Just goes to underline how potent stories are, and how important it is to tell your key stories as well as possible.

An incisive take on tone of voice, courtesy of one of the big pop hits of the 8Os: A-Ha’s Take On Me…

“We’d already written Take On Me but hadn’t recorded it…It reminded me of an advert for chewing gum that went: Juicy Fruit is a packet full of sunshine. That influenced the verse melody,” says A-Ha’s singer Morten Harket. “Paul [Waaktaar-Savoy, guitarist] had the idea of really using my vocal range in the chorus, having notes rising in octaves like Strauss’s Also Sprach Zarathustra. As for hitting that last high note, you either have wings or you don’t – the voice is not in the throat, it’s in the blood. It’s what you envisage, what you believe. ”

From the flighty falsetto of Take On Me to the rutting bellow of the red deer in Bushy Park last weekend: 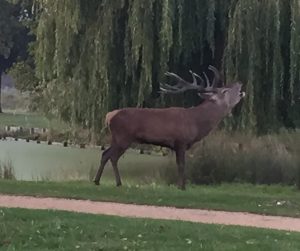 Albeit way down the scale, this character’s call was equally full of emotional conviction.

High notes or low, find your voice in your blood. Sing from the heart.

A thumbs up from Bill Gates has apparently sent John Brooks’ previously out-of-print Business Adventures into the bestseller lists. “Unlike a lot of today’s business writers, Brooks didn’t boil his work down into pat how-to lessons or simplistic explanations for success,” says Gates. “You won’t find any listicles in his work. Brooks wrote long articles that frame an issue, explore it in depth, introduce a few compelling characters and show how things went for them.”

Through the course of his book, Randall explores 16 myths of the world of business. It is full of good insights that stand the test of time, such as this from The Myth of Communications: “The determining factor in effective communication is conviction. The authoritative voice that carries its message straight into the heart of every listener is that of the man who knows exactly what he believes. His utterance simply will not be denied, because it pours straight out from his spirit… No new marvel of technology will ever be able to bestow that quality synthetically upon a banal message from a man who has nothing to say because he believes in nothing.”