Getting others to say how good you are…

I’m a big fan of case studies. Done well, they’re one of the best ways to engage people and build credibility. The key to a great case study? It starts with a great interview – being well prepared, knowing what to ask, how to coax and when to keep quiet. Then it’s a matter of telling the story clearly and with feeling, so it can be enjoyed and remembered.

I’ve written many case studies over the years – from one-off success stories to long-running programmes for BT, BP, HP and other big companies. Here are a couple of examples:

For Puma Energy’s annual report, I wrote a handful of key stories highlighting how, in different ways around the world, the company has been living up to its purpose of energising communities. Stories like this one, set in and around the Panama Canal: 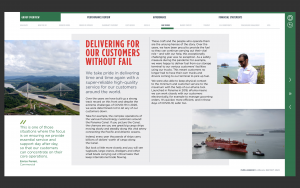 DELIVERING FOR OUR CUSTOMERS WITHOUT FAIL

We take pride in delivering time and time again with a super-reliable high-quality service for our customers around the world.

Over the years we have built up a strong track record on this front and despite the extreme challenges of COVID-19 in 2020, we were determined not to let any of our customers down.

Take for example, the complex operations of the various Puma Energy customers around the Panama Canal. If you picture the Canal, the chances are you see great big cargo ships moving slowly and steadily along this vital artery connecting the Pacific and Atlantic oceans.

Indeed, every year thousands of ships carry billions of dollars’ worth of cargo along the Canal.

But look a little more closely and you will see tugboats, large cranes, dredgers and other small boats carrying out critical tasks that keep international trade flowing.

These craft and the people who operate them are the unsung heroes of the story. Over the years, we have been proud to provide the fuel so they can continue carrying out their vital role – and with our help, this exceptionally challenging year was no exception. As a safety measure during the pandemic for example, we were happy to deliver fuel from our storage terminal to our various customers’ facilities using our trucks. This meant customers no longer had to have their own trucks and drivers coming to our terminal to pick up fuel.

We were also able to keep physical contact to the minimum and customer service to the maximum with the help of our ePuma tool. Launched in Panama in 2018, ePuma means we can work closely with our customers electronically, for example to manage upcoming orders. It’s quicker, more efficient, and in these days of COVID-19, safer too.

“This is one of those situations where the focus is on ensuring we provide essential service and support day after day, so that our customers can concentrate on their core operations.” Enrico Ferrari, Commercial, Puma Energy

For the best part of 10 years I worked on a series of case studies for HP – writing dozens of stories that all followed a classic problem-solution-results structure liberally enlivened by direct quotes. For example:

Slimmer, leaner, fitter
“Like all companies in the recession, we’ve had to look a lot more carefully at how we are running the business. Are we running it efficiently? Are we producing the services that clients want? How do we make ourselves slimmer, leaner and fitter in order to meet the economic change that we’ve all had to face?”

Some key questions raised by John Spanswick, Director, Bovis Construction Limited. For any business to succeed, finding the answers is vital but by no means easy. What’s more, if continuous improvement is the goal, the same questions need to be asked – and new answers given – time and time again.

So when HP consultant Michael Kidson suggested Bovis take part in his Teamwork for Results Innovation & Motivation (TRIM) event, John listened. “It was the right time to be raising those sorts of issues. It coincided with us embarking on what we call our Effectiveness initiative: our desire to increase effectiveness not only in Bovis but in the industry for the benefit of our clients.”

Bovis Construction Limited – committed to delivering outstanding quality and value
Part of the Bovis Construction Group, one of the largest construction groups in the world, Bovis Construction Limited operates throughout the UK. Projects range from retail developments for Marks & Spencer to the Channel Tunnel rail terminal at Waterloo, from the Lloyds building in the City of London to the Theatre Royal, Newcastle. Whatever the task, the company’s mission is to deliver the best in management services, systems and resources and thereby provide its clients with projects of outstanding quality and value.

Providing a fee-based professional service rather than bidding lump sum in competition with others is central to achieving the corporate mission. Bovis is the only construction company in the UK to operate exclusively on a fee-paid basis. “From a cultural point of view we believe that lump sum traditional tendering at the outset creates an adversarial environment,” says John Spanswick. “We believe very strongly in creating long-term business partnerships where the motivation is for both parties to succeed. So we subcontract people and materials for a project and take full responsibility for building to time, cost and quality requirements on behalf of our client. At the end of the day that’s how you get best value.”

A different route to quality
Proof of Bovis’s commitment to creating long-term mutually beneficial business partnerships can be found in the company’s relationship with HP. “For the last eighteen years or so we’ve been working on their construction projects,” says John. “And during the major part of that period we have purchased their products as well. There is a history of strong business relationships both at executive level and lower down the management line. So we’re always talking to one another about aspects of business.” In this instance, aspects such as teamwork, results, innovation and motivation.

Michael outlined the TRIM process and how it might enable Bovis to look at their business in a slightly different way. “It’s the opposite of ‘rabbit out of a hat’ consultancy where if you’re lucky you get a specific short-lived pay-off,” he explains. Despite – indeed, partly because of – its condensed format, TRIM identifies major problems, sets up a process for solving them, and passes on permanent problem solving skills for people to use in their day to day work.

Bovis decided to hold the event. The same two day pattern is followed for every organisation: the first day is devoted to identifying problems, the second is all about curing them. Fifteen people from throughout Bovis were selected to take part. “Without Michael’s guidance we would probably have fallen into the usual trap of just collecting people from within their own department,” John admits. “We intentionally selected people from across different areas so that they were in a forum where they were able to question what other people were doing.”

Cutting out the detail; focusing on the problems
The first step, on the first day, was to sit down and root out examples of bad practice – brain storming for bottlenecks. To this end, Michael has devised an approach based on the quality improvement techniques HP has been employing for many years but delivered, crucially, in an entirely new way using symbols. As he explains, “The symbolic approach is so good because straight away everybody, whether from sales, legal or technical departments, has a common language. Symbols also allow you to escape the minutiae and focus on what is stopping things happening. It introduces very quickly the idea that what you’re going to be talking about is quantifiable issues, not the detail.”

From bottlenecks to battle plans
Over a hundred different bottlenecks were identified. The next step, under the guidance of Michael and two of his colleagues, was to work out why the bottlenecks occurred, which were some of the more important ones and what processes they affected. “What’s interesting is that all the areas were ones where, over recent years, someone at some point had said I think there might be a problem there. But we’d never actually done anything about it,” says John.

Six core themes emerged, from the very specific – the bid process – to the more general – working practices and duplication of effort. Four teams were created and each one was given a different theme. (Two themes were put on one side.)

One team was later dissolved but the remaining three became the nucleus for working out what should be done and for doing it after the event.

Bovis agreed to spend an extra day for each team to produce documentation setting out what they were going to do, by when, and how they were going to roll it out within the company. There were various ways. It was their decision – they chose the route they felt most comfortable with and TRIM gave them the tools to carry the task forward.

Concentrating the mind
“One of the big pluses was that it helped us concentrate our minds on looking at the way we run our business in more detail.” John is the first to admit that processes in the construction industry are historically less refined, monitored and reviewed compared with, say, those in the car and aerospace industries.

Combine a tradition of less than perfect working practices with inherent sensitivity to economic cycles and you have an industry which, as John points out, “goes from feast to famine” rather than following a natural path of continuous improvement. Much of the ’80s was spent feasting: “The industry was so busy that frankly the priority was to find the resources to do what was in front of you rather than worrying too much about how you actually did the work.” The turn of the decade was a more famished affair, a time for tracking down and rectifying – rather than overlooking – bad practice. A time for TRIM.

Teamwork – breaking down barriers
To improve the way people work you have to get people working together. “Probably the biggest single benefit of TRIM is that it has enabled a coming together of different parts of the company, a better understanding of what their problems are and how to go about solving them. If you don’t actually recognise that somebody else has got a problem you certainly won’t solve it,” says John. “This is what makes the multi-disciplinary nature of a TRIM group so important.”