Back in 1997, recently reinstated CEO Steve Jobs stood up in front of his staff and gave his own inimitable take on what Apple, at the time in desperate need of a turnaround in its fortunes, at its core was all about:

“Our customers want to know who is Apple and what is it that we stand for. Where do we fit in this world? What we’re about isn’t making boxes for people to get their jobs done. Although we do that well. We do that better than almost anybody, in some cases. But Apple is about something more than that. Apple at the core – its core value is that we believe that people with passion can change the world for the better…and that those people who are crazy enough to think they can change the world are the ones that actually do…”

The rest is history, the history of arguably the most loved and certainly one of the most valuable brands in the world today.

It’s a testament to being clear about your core and sticking to it, and an encouragement to all of us to be brave and think different.

The other day I came across an old Nike shoe box from the 70s. It was once home to my sister’s prized Raquette tennis shoes but some 40 years on now contains assorted collectors’ cards from my youth – Asian Wild Life (Goitered Gazelle), Famous People (Sir Laurence Olivier) and the McDonnell F-101A Voodoo from the Lyons Tea Wings of Speed series for example. I’ll no doubt delve into the contents more deeply another day but for now it was the outside of the box that held my attention…

The familiar swoosh was there: 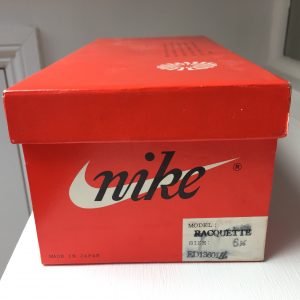 But so too was an eye-catching swirl: 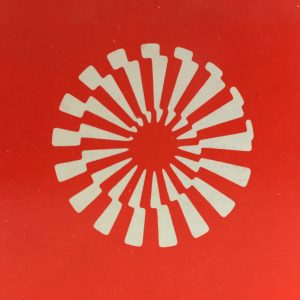 Accompanied by the clear and confident: “Nike sports shoes are manufactured to the exact specifications of champion athletes throughout the world. Continued research and constant development are responsible for the athletes of the Seventies changing to Nike.”

Changing to and sticking with.

The power of stories…

Back in 2007 Chicago-based artist Theaster Gates was only able to sell his pottery bowls for $25 a piece, despite a great deal of time, effort and money going into making them.

“I decided that the reasons were: I’m a nobody, so the bowl is a nothing,” says Theaster. “The bowl looks like lots of other bowls that are mass produced you can buy for even cheaper than $25; the bowl has no magical context that would help get it valued in other ways. If I could be a somebody; if I could elevate [the bowl] beyond the everyday context, would people value it more?”

So Theaster set about creating that all-important magical context in the form of an imaginary mentor with an intriguing and appealing story to match. Meet Yamaguchi, a gifted Japanese potter who fled Hiroshima for Mississippi, where he married a black woman and created a unique ceramic style blending Asian and African-American techniques.

This carefully crafted fiction paid dividends. Theaster/Yamaguchi’s bowls began selling for far more than $25, for people weren’t buying the pottery so much as the character and story surrounding it. They were buying into the magical context – the brand in other words. For all great brands are essentially great stories. Therein lies their power.

Libération’s lament that its shareholders’ plans would reduce the paper to “a mere brand” reminds me of the misconception running through No Logo, Naomi Klein’s critique of brands from back in the day – the notion that a brand is something other, something unwelcome if not evil, done to you by someone else. In short, an ill-intentioned imposition. It isn’t. It is part of you – your brand is your character. Like it or not, like them or not, we all have brands/characters. We simply need to understand and communicate them in truthful and enjoyable ways.

Like many of the most interesting aspects of life, commercial or otherwise, this is a never-ending process, a living enterprise, an ongoing endeavour. So don’t duck, swerve or lament your brand, embrace and make the most of it.

Wise words from the man in the 90-year-old lederhosen…

Johannes Gutmann has over the past two decades or so built from scratch a highly successful business based in his home region of Austria marketing organic produce to over 50 countries around the world. Along the way he has become known for sporting the same pair of 90-year-old lederhosen and scarlet shoes pretty much everywhere he does business.

It has been a highly distinctive and memorable bit of brand building. “You just need an idea of how you want to present what you have,” says Johannes. “For example, for someone who sees my lederhosen, they are worth nothing. But they have a high non-material value: they are a story. And that works just as well on the world stage as at a market in the Waldviertel.”

From Austria to Australia, from farming to pharmaceuticals, no matter where in the world you are or what business you’re in – for your brand, stories are priceless.