I help define brands and provide guidance on how best to communicate them. This is one of my core areas of experience and expertise. 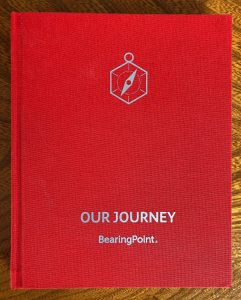 I structured and wrote BearingPoint’s core brand story. Conceived as an ongoing journey, it takes you from the firm’s creation through its core purpose and culture and on into the future. The project included interviewing senior partners to get their own particular take on the story and working with designers to help them visualise the story.

We produced the story as a limited edition hardback book and as an interactive online journey. 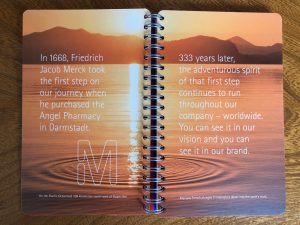 I wrote the following story for Merck KGaA to help mark the relaunch of their brand. It revolves around the extraordinary endeavours of the Piccard family, who for Merck embodied the spirit at the heart off their brand…

On the Pacific Ocean bed 338 kilometres southwest of Guam, the Mariana Trench plunges 11 kilometres down into the earth’s crust. This is the Challenger Deep, the deepest place on earth. It is so deep it could swallow up Mount Everest and leave a couple of kilometres of clear water between mountain-top and ocean waves. On 23 January 1960, Jacques Piccard and Don Walsh became the first, and still the only, people to explore its depths.

They made their record dive in the Trieste, a bathyscaphe invented and built by Jacques and his father, Auguste Piccard. No stranger to adventure, on 27 May 1931, Auguste had made the first of a number of record-breaking balloon ascents in a pressurized cabin, another of his inventions. On 11 March 1999, Bertrand Piccard, Jacques’s son, flew over the Mariana Trench. Together with his co-pilot Brian Jones, he was a third of the way through the first successful non-stop round the world flight in a balloon. “I was delighted to find that the line of my horizontal adventure was crossing the site of my father’s great vertical endeavour, and I phoned him there and then to tell him.” Diving deeper, flying higher, going further, achieving more than anyone has before – for generations, the Piccard family has embraced the adventure of exploration. As Bertrand put it in his diary as he headed out across the vast blue of the Pacific: “Adventure is something out of the usual pattern, a point at which you cannot avoid confronting the unknown, so that you have to dig inside yourself to find the courage and resources to deal with what may lie ahead, and to succeed.” 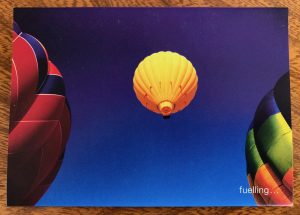 I began working with BP when the company first went ‘Beyond Petroleum’ with its new Helios mark at its heart. My work included writing key areas of the brand intranet site; tone of voice guidelines; launch, promotional and event materials for the Helios Awards; brand books for various parts of the business; and success stories from around the world.

To encourage BP’s 100,000 people in 100 countries to share their experiences, I wrote a series of story cards highlighting achievements around the world. Story cards such as this one:

The most abundant substance on the planet, capable of being turned into nothing but pure energy and water – no wonder hydrogen is potentially the wonder fuel of the future. The trouble is, it’s devilishly hard to get hold of. And then you have to store and transport it. None of it’s easy, but we’re doing all we can to make it happen. We’re working on producing hydrogen from hydrocarbons without letting the carbon dioxide enter the atmosphere. We’re exploring the use of renewable energy to turn water into hydrogen and on into more energy. We’re collaborating with the major auto companies to work out how best to transport hydrogen. Just three examples of our determination to make the dream of hydrogen fuel a reality.